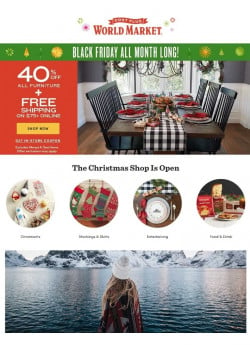 Browsing the weekly flyers of World Market has never been easier. Now, you can find all weekly sales and ads in one place! Check it out and save hundreds of dollars!

After the success of this store, they soon spread across the Bay Area and later into other states. There are 276 stores spread across 35 states in the United States.

"Cost Plus" shifted the branding of its stores to either World Market or to simply World Market in markets new to the brand in the 1990s. World Market went public and started trading on the NASDAQ stock market In 1996.

World Market started an online crowdsourcing-model marketplace called Craft by World Market in 2014. The site will post items for one month at a time, and sell only products that have a definite number of pre-orders to ensure enough customers will buy them.