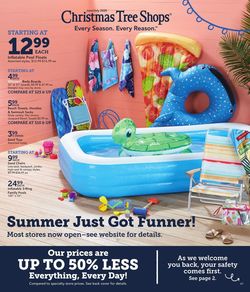 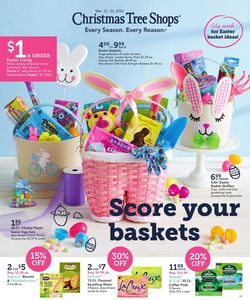 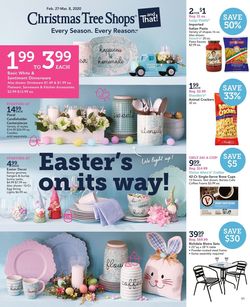 Browsing the weekly flyers of Christmas Tree Shops has never been easier. Now, you can find all weekly sales and ads in one place! Check it out and save hundreds of dollars!

In 1970, the retail chain of Christmas Tree Shops was established in Yarmouth Port, Massachusetts by Doreen and Charles Bilezikian. It is a complex of three small stores (Barn shop, back shop, and front shop). The front store on Route 6A, explains the reason behind the name Christmas Tree Shops instead of Shop.

The chain of Christmas Tree Shops had slowly been expanding beyond Cape Cod since the 1980's. The company possesses 83 stores in 18 states as of 2014. Expansion for the chain has included stores in Kentucky, Indiana, Ohio, and Michigan. Its newest stores opened in Dallas, Texas, Greensboro, North Carolina and Augusta, Georgia; the three opened under new ownership. Till date, the chain possesses a strong presence on Cape Cod, where it operates six locations.

In 2003, Bed Bath & Beyond acquired the Christmas Tree Shop, although the Bilezikians remain involved in the executive operations. The original stores on Route 6A were closed in January 2007, though the site is now used by stores owned by Greg the Bilezikians' son. A number of the earlier Cape Cod stores, as in West Dennis, are dwarfed by lately built stores.