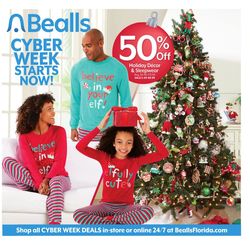 Bealls Florida in the cities

Check the current Bealls Weekly Ad and don’t miss the best deals from this week's Ad!

Browsing the weekly flyers of Bealls has never been easier. Now, you can find all weekly sales and ads in one place! Check it out and save hundreds of dollars!

22-year-old Robert M. Beall Sr. established a dry goods store in Bradenton, Florida in the year 1915. He invests his entire savings in merchandise; he used empty wooden packing crates as his first display tables. Because the store sold nothing for more than one dollar, he called his store The Dollar Limit. Due to the World War I inflation, in 1920 Beall renamed his store The Five Dollar Limit.

The Business made a huge profit during the Florida land boom of the 1920s; in a few years, Beall purchased a vacant lot facing the courthouse and erected a new modern department store, which opened for Christmas, 1924. The Florida boom can to an end in a few years, only to be followed by the stock market crash. The business was hit and unable to pay its debts, Robert Beall lost his business to the bank. He stayed on as manager through the depression. As at 1944, he had saved enough to repurchase it. For many years, the store lived up to its motto, “We Outfit the Family for Less."