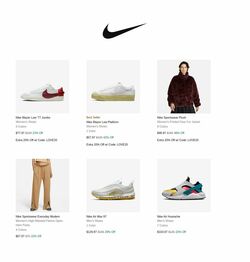 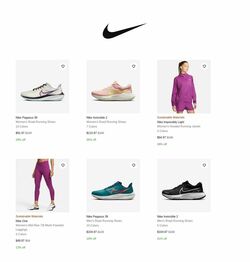 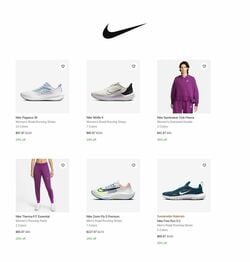 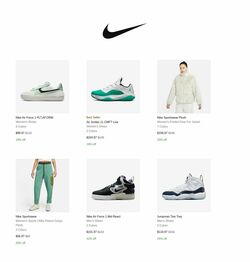 Nike in the cities

Check the current Nike Weekly Ad and don’t miss the best deals from this week's Ad!

Browsing the weekly flyers of Nike has never been easier. Now, you can find all weekly sales and ads in one place! Check it out and save hundreds of dollars!

The Nike brand was established in 1964. The idea and founder were two friends. One of them was William Bowerman - an athletics coach. The other was William's former student Phil Knight, a short-distance runner and average business student at the University of Oregon.

The year 1971 brought a breakthrough. The brand resigned from distributing Japanese shoes to the American market and decided to design and sell its own models. The following year, a unique business decision for the time was made: an exclusive contract was signed, requiring the wearer to wear only Nike shoes. The person chosen was tennis player Ilie Nastase.

Also in the 1970s, Nike Air technology was introduced to the world. The gas-filled cushion, placed in the inner sole, perfectly absorbed any shocks. Thanks to this, the user of shoes with Nike Air technology received a number of benefits: more efficient workouts, perfect protection from injuries, and excessive muscle strain. Today, Nike is a leader in its industry: their shoes and apparel are the most popular choice not only in the United States but also around the world!