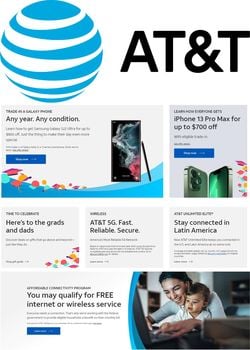 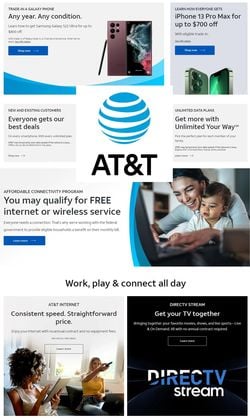 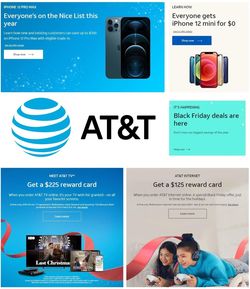 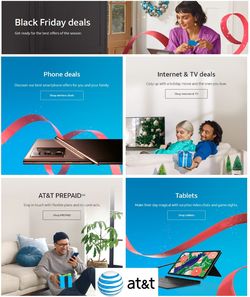 AT&T in the cities

Check the current AT&T Weekly Ad and don’t miss the best deals from this week's Ad!

Browsing the weekly flyers of AT&T has never been easier. Now, you can find all weekly sales and ads in one place! Check it out and save hundreds of dollars!

AT&T was founded on March 3, 1885, to create a nationwide telephone network, a transformation of the Bell Telephone Company, the telephone company of Alexander Graham Bell's father-in-law and American investors. Work began in New York City. Seven years later the network reached Chicago, and in 1915 San Francisco. In 1927, transatlantic communications were launched, but they used radios to do so. It was not until 1957 that cable communications were established.

In 1996, AT&T spun off its manufacturing and technology divisions, including the well-known Bell Laboratories, to form a new company, Lucent Technologies.

Because of the steadily declining importance of long-distance calling, which remained with AT&T, the company also performed poorly in the market. On January 27, 2005, the New York Times newspaper reported that SBC Communications, one of the subsidiaries founded in 1984, one of the owners of the Cingular network (along with AT&T and BellSouth - a baby-bell bought by SBC) was negotiating a buyout of AT&T for over $16 billion. The deal came to fruition on November 18, 2005. As a result of the purchase, SBC Communications dropped its brand and rebranded itself as AT&T, while Cingular changed to AT&T Mobility.