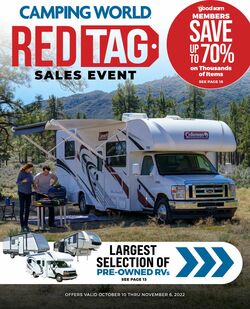 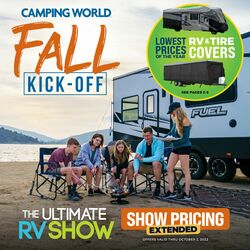 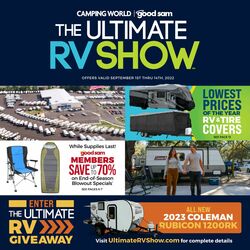 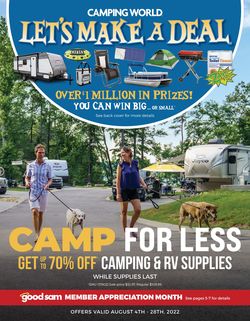 Camping World in the cities

Browsing the weekly flyers of Camping World has never been easier. Now, you can find all weekly sales and ads in one place! Check it out and save hundreds of dollars!

In 1966, Camping World started with a small store in Beech Bend Park, an amusement park outside of bowling green, which billed its campground as the worlds largest. David Garvin, the son of the park's owner took out a loan and opened a store due to campers at the park were requesting a store where they could buy supplies. Garvin amassed a large customer list as the years went by, which proved to be a windfall later when he added a mail-order division to the company. That division thrived, fueling the company's growth for years to come.

Garvin declared plans for a tremendous development near Franklin, Kentucky called "Garvin's" in 2005. The development, defined by Garvin as "a combination of Camping World, Disney World, and Bass Pro Shops", will feature a large Camping World store with RV 250 service bays; a five-story, 650,000 square foot permanent RV trade show and exhibition area; a "free range" campground with dry-camping sites; a camping museum; more. Due to the recession, however, the venture never got off the ground, and much of the land intended for development was sold at auction in October 2011.

Camping World raised $251 million in an initial public offering in early October 2016. The 11.4 million shares sold for $22 each. Lemonis co-owns the company with private equity firm Crestview Partners and plans to hold "substantial control" through his ownership of ML Acquisition and ML R.V. Group.